In: On the Trail/By: Jay Simpson/Comments Off on Wolf Country/

It has been two weeks (forever) since we saw wolf tracks in the snow of the Wallowa Mountains. From that point onward, part of me has lamented every mile walked and bicycled as they took us further and further from any known area of wolf activity. Here we are, a wolf expedition quickly moving away from most of Oregon’s wolves! 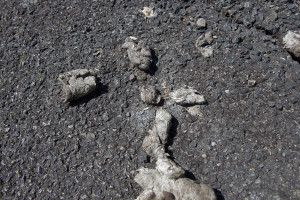 Coyote scat on the side of the road, Klamath County, OR

But the further out of wolf country I was, the more I looked for wolf scat and tracks because it would be all the more surprising, and out of place. But there was nothing.

Then while walking a section of the Pacific Crest Trail, a sign welcomed our team to the Rogue River-Siskiyou National Forest and the obvious hit me: we’re back in wolf country. This is the National Forest where Wolf OR-7 lives. This is where he and his mate reportedly denned and started their pack. This is a new territory reclaimed by wolves as modern wolf country.

But a few steps later I was struck with another thought: there’s even more to modern wolf country than the Rogue River-Siskiyou National Forest for the simple fact that Wolf OR-7 traveled in the same areas as our entire route. Every step and mile of our expedition has been within areas of his dispersal, and therefore within modern wolf country.

And he’s not the only one. Wolves are on the move and we often don’t know where they roam. Wolf OR-7’s mate was born somewhere else and then traveled to Southwest Oregon. And the wolf whose footprints were confirmed on the foothills of Mount Hood came from one place and could be anywhere now. We don’t know, and we don’t know where other unknown wolves are too.