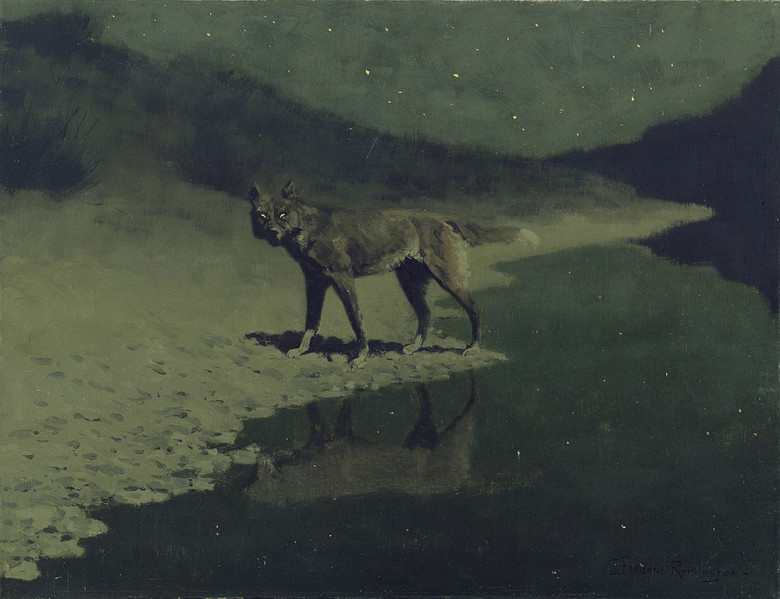 In: Stories Tales & Fables/By: Jay Simpson/Comments Off on TALES: The Creation of North America and the Wolf/

Before there was earth… before the dawn… before there was light… there was Tirawa, the great creating one… and Tirawa was calling across the heavens… calling the spirits along the sky path… calling the Powers of the Four Directions, calling them all together in one great creation council. Together they began to sing… singing and shaking their rattles. And as they sang, winds began to whip across the heavens… winds whipped up clouds… clouds gathered in deep, dark pools. And then Tirawa took a rose quartz pebble and dropped it. Easily, it fell in among the clouds… and then the Lightning and Thunder struck right through the rose quartz. The storm began to subside. The clouds split and floated away… and below the creators of heaven was a vast ocean.

Now, the Powers of the Four Directions lifted their war clubs and hit these waters… spilling up great tidal waves… revealing the lands of the earth. But it was not until the Lightning and the Thunder Beings struck the earth that there was life in it.

Tirawa knew that the waters of the earth were not good to drink, and so again he began to call across the heavens… calling together the spirits… and the spirits began to sing… singing and shaking their rattles… and as they sang, winds whipped across the ground, carving deep ravines in the solid earth… and storm clouds began to gather… and poured their rains into these ravines. But it was not until the Lightning and Thunder Beings struck into the water… and the water carried the sound of Thunder within its rolling that Tirawa knew these waters were sweet to drink.

And so on and on the spirits of the sky path sang our world into existence… all of them were there except for one… the forgotten one… the wolf.

Far off in the southeastern sky, the wolf star watched and wondered. Curious about the creation below, the wolf star sent itself down to the earth in the form of a gray wolf… and began tracking upon the land.

Now, the creation council decided to send someone down to examine their creation. They sent down Thunderer.

Thunderer was a magnificent being. He was made from the storm clouds out of the West. His mother, the evening star, wove for him a whirlwind sack. His father, the morning star, gathered stars from across the sky path and poured them into the sack.

These stars would be the first human beings. Thunderer slung the whirlwind sack across his back and set out across the earth. Each time Thunderer stepped down to the earth, lightning bolts struck the ground. Out of his blackened footsteps, buffalo leapt up and ran out across the plains.

At times, Thunderer would stand on the earth as a great giant of a man and set his whirlwind sack down. At once, human people would spill out. Some set up their lodges, and others ran off to hunt buffalo. Then they would prepare a great feast for Thunderer. Thunderer was delighted with these little human people. When the feast was finished, he set his whirlwind sack on the ground and sucked them back up inside.

In this way, Thunderer traveled on. All the while, the wolf was tracking his footsteps. When the wolf finally came upon Thunderer, he was sleeping up against the front range of the Rocky Mountains… using the whirlwind sack as a pillow.

The wolf ran far into the south grasslands before he dropped the sack. When he was far enough away, he set the sack on the earth, and out piled the human people. They set up their lodges, and some went off to hunt buffalo.

One old woman noticed the wolf. Thinking he was Thunderer in another form, she fed the wolf some dried buffalo meat. The wolf lapped it up. But the others, who had gone off to hunt buffalo, couldn’t find any buffalo, and they began to wonder… “Who is that strange animal? An evil spirit?”

Then, from across the plains, they saw Thunderer coming… with his long lightning strides. At once they thought, “That animal… he must be an evil spirit!” They ran back to the old woman’s lodge. They lifted their arrows and shot. The wolf whined… loped for a step or two… and dropped.

Then, outside the lodge, they heard a powerful storm gathering… SSSSHHHOOO! They piled out of the lodge, and there before them stood Thunderer.

Thunder said, “Ooooh. Look what you have done. You have killed an animal you did not understand. Because you have killed something before you understood it, death, another mystery, will now live in its place. Ooooh, I would have carried you forever in my whirlwind sack, but now death will live with you in the world.”

Thunderer told the people to take the skin of this animal and make a sacred bundle from it and hang it in their lodge, facing the North Star. He told them that soon there would be many animals like this one. They will be called Skidihk, the wolf. “And you,” he said, “you will be called the Skidi Pawnee, the Wolf People. In your name, and in death… you will always remember to respect the mysterious one.”