Of Mosquitoes and Men 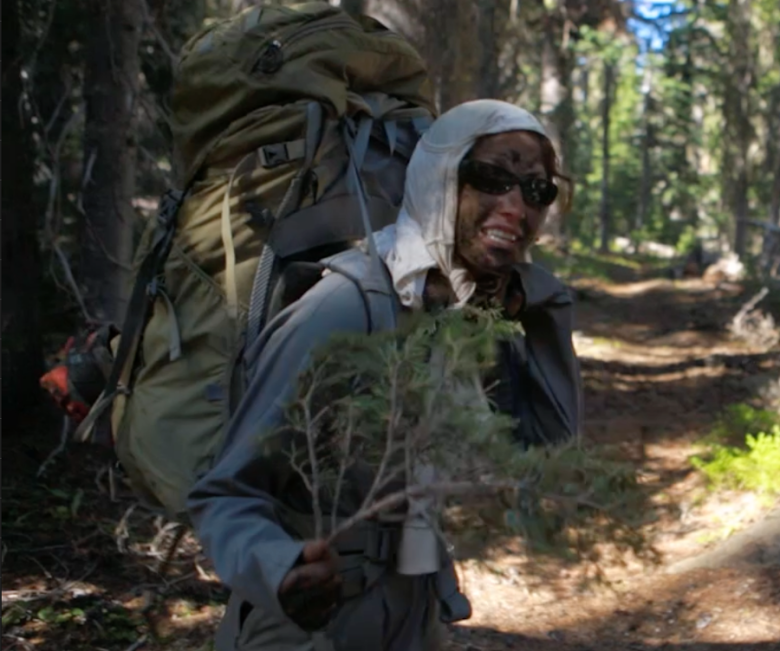 Of Mosquitoes and Men

In: Encounters, On the Trail/By: Rachael Pecore-Valdez/Comments Off on Of Mosquitoes and Men/

“The most spectacular trait of wolves, however, is the most controversial: like man himself, wolves must sacrifice other creatures in order that they themselves might survive.” – L. David Mech, “The Wolf”

In the face of a full-scale mosquito assault, my strongest defense wasn’t the additional shirt hastily tied around my head or the mud smeared across my swelling face, it was philosophy.

What these mosquitoes lacked in stealth they made up for in indomitable numbers and the maddening din of their mind-scrambling whines. Blood was shed. A lot of mosquitoes were lost that day, but many more survived to tell the tale to their young. It was a fair game; survival on either side was measured by awareness, innovation and extreme endurance.

To the mosquitoes that fell that day, the frail bodies I watched float to the ground as my hand automatically brushed their kamikaze trajectory aside, I salute you. One-hundred and eighteen pounds of my flesh against your tiny 2.5 milligrams, and still you persist, with the remarkable courtesy, unlike tics, to warn me of your incoming bite.

I tried to keep my hands still and think of the birds, bats and frogs that are fed by mosquitoes. I questioned the value of a mosquito’s life to mine. I dug deep, but could not overcome my instinct to swat and kill on this day. Suddenly the crux of what this entire crazy expedition meant for me was illuminated. It’s a question of how we, as humans, decide what is okay to kill. It’s not just about wolves but about mosquitoes, spiders, rats, sharks and snakes too. It’s about how we treat that which we fear, don’t like or understand.

Who lives and dies is at the source of endless eye-rolling, angst and debate among carnivores, vegans, vegetarians, breathetarians… I am alive because countless plants, fungi, fish, birds and other animals have died. I’m not proud of it, but this is planet earth, it’s just how it works out here. Our society tends to hide, prevent, and minimize death as much as possible, which makes sense to me because death sucks. Cities are controlled and managed for optimum human convenience and human life, but those at the heart of food production in rural areas encounter the life-death cycle frequently. Growing up around a farm, I watched Rosy, a cow, be shot and I gratefully ate her without a second thought. One day, I hope to repay the favor by letting my body feed worms and soil critters, in this grand, crazy cycle of death. But not today, and not to mosquitoes.

As I felt the cheeks under my eyes begin to puff up in reaction to the success of mosquito strategy, it seemed quite clear that were I to stand here, naked in the Sky Lakes Wilderness in front of a million strong horde of mosquitoes, that they would eat me alive or cause an allergic response that would eventually shut my body down. They would not hesitate to kill me. But it wouldn’t be personal. At the other extreme, I had no vendetta by which to spray the entire region with DDT. Extending the battle beyond my direct experience, with a chemical that has the power to collapse the local food chain and cause collateral damage such as cancer, has proven undesirable and ineffective in the long-term. Surely though, I have as much a right to live as anything else? I have the right to defend my self and to try my hand at survival as long as I am able on this wild, complex planet?

Wolves played spectacular villains in European folklore, and when European immigrants reached the shore of North America they wasted no time in placing a bounty for wolf skins in 1630. After near extinction in the U.S., wolves are now protected by the Endangered Species Act, and in Oregon may only be killed under particular circumstances governed by the Oregon Wolf Management Plan for chronic depredation of livestock. Landowners, however, must first demonstrate that they’ve tried their best to build brick houses and protect the little pigs so to speak, with nonlethal techniques such as sheep dogs, range riders, burying carcasses, fladry, or radio-activated guard boxes to name a few.

I made my peace with mosquitoes, and those that died by my hand that day with this philosophy: self-defense is natural, I will defend only my personal borders, with mosquito barriers, bug spray, mud, and pine branches… but for the few that outwit my admittedly innovative defenses, let it be known that they proceed at their own risk. Mosquitoes, wolves, mountain lions, coyotes and other carnivores are simply doing what they need to do to survive, and so are humans.