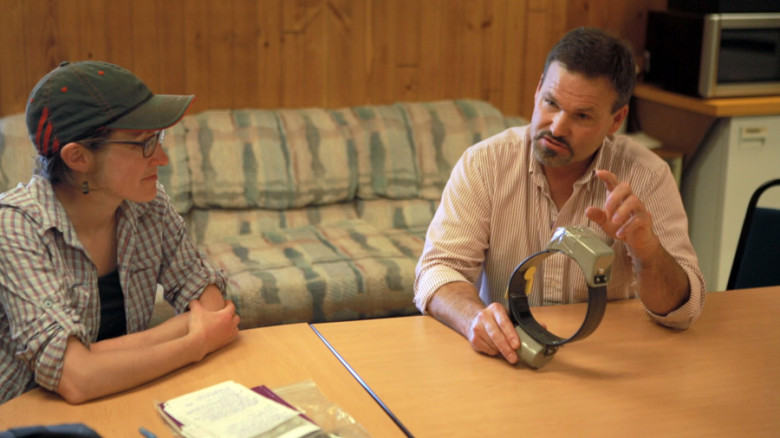 In: Education/By: Rachael Pecore-Valdez/Comments Off on It All Began with a Collar/

Our expedition, and all that we know about Wolf OR-7, stems from the GPS collar that Wolf OR-7 was fitted with one cold day in February of 2011.

The day was 13 below zero, recounts Russ Morgan, the Wolf Program Coordinator for Oregon Department of Fish and Wildlife (ODFW) in an interview with the Wolf OR-7 Expedition team. The Imnaha wolf pack was located in the Wallowa Mountains, and from a helicopter Russ Morgan took aim with a specialized dart at the first wolf he could single out from the pack. That wolf happened to be Wolf OR-7. The level of responsibility Russ Morgan now had with a sedated wolf on his hands, prompted a quick helicopter landing and Russ took off to find the wolf as quickly as possible through deep snow and a steep canyon.

Thirty to forty-five minutes after locating the wolf, Russ had taken a tissue and blood sample for genetic analysis, weighed and fitted Wolf OR-7 with a collar. This wolf was the 7th wolf to be collared in Oregon, and became known as Wolf OR-7. By the time Russ finished, his hands were so numb from the cold that he couldn’t operate a camera, which is why there are no photos of Wolf OR-7’s capture.

Wolf OR-7’s collar is the most expensive type of collar ODFW uses, and weighs 1 pound, 13 ounces. For comparison, adult male wolves typically average between 100-110 pounds. The collar Wolf OR-7 wears is fitted with a battery pack that hangs below the chin, the top of which holds a GPS unit that communicates to a satellite. Once a day, data is sent to a computer in Germany, where the collar was manufactured, and then less than a second later it reaches ODFW’s computer system. Wolves are tough on collars, and it’s a struggle for ODFW to keep them functional. Twenty-five wolves have been collared in Oregon to date, and ODFW currently receives data from nine functioning wolf collars.

The decision to collar an animal is not taken lightly; there is a lot to consider including weighing the risks of contact to both wolves and biologists. The time of year is important as wolves den and raise pups in spring and summer, and human contact during this sensitive period could add undue stress. To minimize stress, all captures are generally planned for fall or winter.

Russ Morgan emphasized that ODFW does not collar animals for fun or simply out of curiosity. ODFW’s actions are directed by the Oregon Wolf Management Plan, a plan that includes input from stakeholders on all sides of the wolf equation including comments from the public. The plan is reviewed every five years, and its success in part depends on data gathered from GPS collars on how many wolves are in Oregon, and where they are in general.

GPS technology is relatively new, and was only built into animal tracking collars within the last 15 years. These collars have become a tool critical to not only better understand wolves, but to help communities better coexist with wolves. ODFW protects point specific locations of wolves, and in fact by the time data is uploaded information is always historical. However, a computer program has divided the region into a map of polygons, and if a collared wolf enters a particular area or polygon, an automated phone system is activated to notify landowners of their potential presence (not exact location). This is particularly helpful for livestock producers who can then deploy additional efforts to monitor their livestock, or take nonlethal measures to minimize potential livestock depredation.

The batteries on Wolf OR-7’s collar have lasted longer than any other wolf collar in Oregon to date, but is unlikely to last through the winter. If Wolf OR-7 had remained a lone wolf, he would have likely been left alone to wear the dead collar for the remainder of his days. The news that Wolf OR-7 is not alone in Southern Oregon, but is now accompanied by a black female wolf, puts the potential of a new wolf pack on the table. As a wolf pack, according to the Oregon Wolf Management Plan, qualifies Wolf OR-7 or the black wolf to be collared this fall or winter. In addition, less invasive tools such as collecting scat samples for genetic analysis will be used.

In just a few short years since that cold day when Wolf OR-7 was collared, data from his GPS collar has inspired not only our expedition route but also the formation of the Pacific Wolf Coalition, a coloring book, an art show, a play, and two documentaries including one of the Wolf OR-7 Expedition. Has information from Wolf OR-7’s collar impacted you?