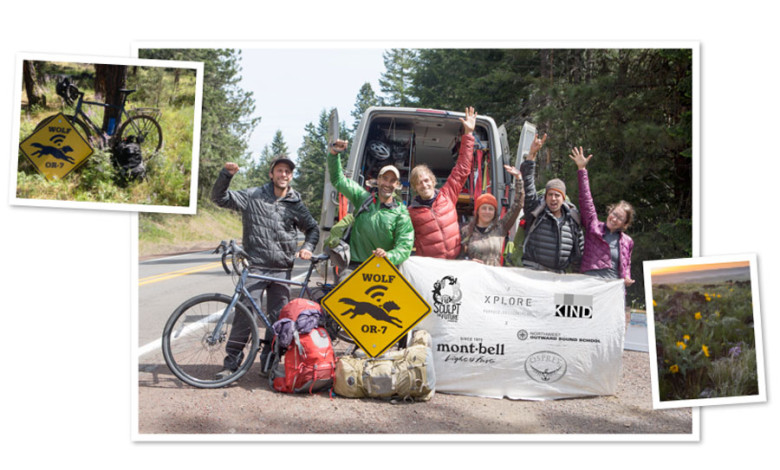 In: News/By: Galeo Saintz/Comments Off on Expedition Report/

A Journey of Surprises

Who could have guessed that the day we set out on the Wolf OR-7 Expedition news would arrive announcing Oregon’s lone Wolf OR-7 had found a mate? And then, although we had thought about it and speculated, we did not expect to hear the day we entered into OR-7’s new home range in southwest Oregon, that he was now the father of the first wolf pack in the region in over half a century, and with at least two pups in the den.
Our expedition mission was to explore coexistence with wolves and to understand the challenges faced by a wolf in the 21st century in the Pacific Northwest. We also planned to share those insights via social media and a documentary account, and as an adventure to cycle and hike hundreds of miles across Oregon and into northern California, which we did. It is now – Mission Accomplished!

It is thanks to highly supportive sponsors, in-kind donors and the many conservation organizations across the Pacific Northwest and beyond, who gave us their endorsement, that we were able to get out there in the first place. Our Kickstarter funders are true champions though, for funding the documentary and educational products we are now producing. In the next few months we will begin the process of turning all the hours of video recorded and the many thousands of photographs into a form that we can share with you all.
No one comes away from an expedition like this without learning something new or being changed in some way. This is a brief summary of insights, what we encountered and what is to follow.

Challenges Faced by Wolves in the 21st Century

While many of the challenges Wolf OR-7 navigated on his 2011 journey from the Wallowa Mountains into the Cascade Mountains and onwards into California, were quite different from those we encountered as humans, he had to contend with: a) Staying hidden from their greatest predator (humans), including fall hunters and being mistaken for a coyote b) Hunting for food and water, c) Establishing a home range, d) Raising pups, and e) Avoiding dangerous roads. In a sense the greatest challenge is the common ground we share with wolves over shared resources, and how we make space for both wolves and humans going into the future. 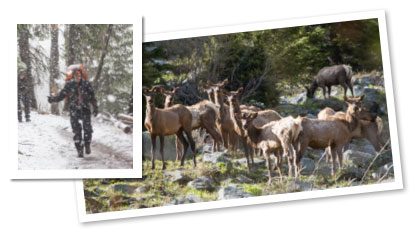 Our encounters and sightings along the route included not only finding the tracks of many wild animals, from bear to mountain lion and wolf, but also included encounters with the people of the land. Ranchers and park rangers, shop owners and generous strangers, were amongst those who inspired us through their stories. Meeting with a coalition of conservation organizations working towards wolf recovery in the region was an opportunity for further sharing of insights. Not to mention our up-close encounters with swarms of mosquitoes in the Cascade Mountains.
On every occasion we were able to have conversations that were inspiring, enlightening or simply insightful regarding wolves returning to their historic rangelands. We came to appreciate that Wolf OR-7’s story is an important one not just in that it is the story of an actual wolf, but because it is just one story, and there are many more that make the lands he passed through what they are. Respecting and listening to the stories and views of others is a starting point for beginning to see wolves without the mask of history. It is a beginning point for practicing coexistence.

Education can take many forms. While we blogged and sent out press releases during the adventure and answered questions emailed to us, we also learnt a thing or two ourselves; that wildlife tracking could be an integral tool to understand and better coexist with the ‘wild things.’ Understanding how wolves, mountain lions, bears or coyotes use an area through their tracks and sign might be helpful for recreationalists to avoid surprise encounters, and to livestock producers to determine when and where to graze sheep or to step up protective measures to avoid conflict. 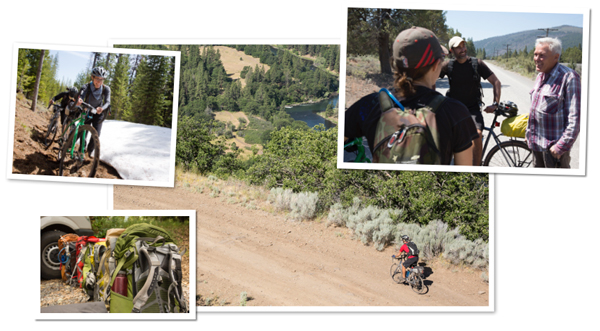 An Extended Team of Support

On any expedition there are the ones out there bracing the elements, but there are many others behind the scenes that make that possible. Our team support grew the further we went. Volunteers brought food and offered educational and social media support, even sponsoring our fuel and the use of the logistics vehicle – the ‘Millennium Falcon’, tubes for bikes that had seen one too many punctures or hot showers at the end of a long day. We were humbled by the support. You all know who you are, and together you helped make this awareness campaign and expedition a success. Thank you.

Our media exposure during the expedition was supported through the on-going media Wolf OR-7 himself was attracting at the same time with the news of a mate and pups. Social media reached further than anticipated in many cases. We now have numerous talks and presentations scheduled in California, Oregon and Washington – if you or your organization would like to host an evening slideshow and talk, drop us an email. A feature article is confirmed for the International Wolf Journal, and article propositions are being considered by Outside magazine (USA), Resurgence (UK), Terra Mater (Europe) amongst others. The documentary footage we have collated to date includes hours of interviews with wolf ecologists, ranchers, conservationists and others. Telling the story and reaching a growing audience continues.

Currently in production are our bandanas, an E-book, a timelapse of the route, and finally a documentary of the journey. Our on-going requests for talks and presentations for the public are encouraging and hopefully we can play our small part in helping to share the science and reality of wolves.

Who knows where Wolf OR-7 and his new family pack will travel next? Who knows where any of his offspring will choose to roam as more wolves continue their recovery in the Pacific Northwest? We don’t know, but by keeping curiosity alive for wolves we hope to see an understanding and tolerance for their presence in the landscape continue.

As a society, we have the technology, the knowledge and will continually need to work on the willingness to find both common ground and effective solutions to managing the challenges carnivores present to a modern agricultural landscape. The people we met along the route of this expedition are testament to the above.

As Wild Peace Alliance moves on to new projects, we are exploring how we can consolidate what we have learned from this expedition, including the possibility of supporting a Wolf OR-7 field term for students, teachers and other adventurers to retrace the expedition route we took, to learn about tracking and wolf ecology and to encounter wild moments of beauty and the people of the the Northwest.

We will keep you posted.