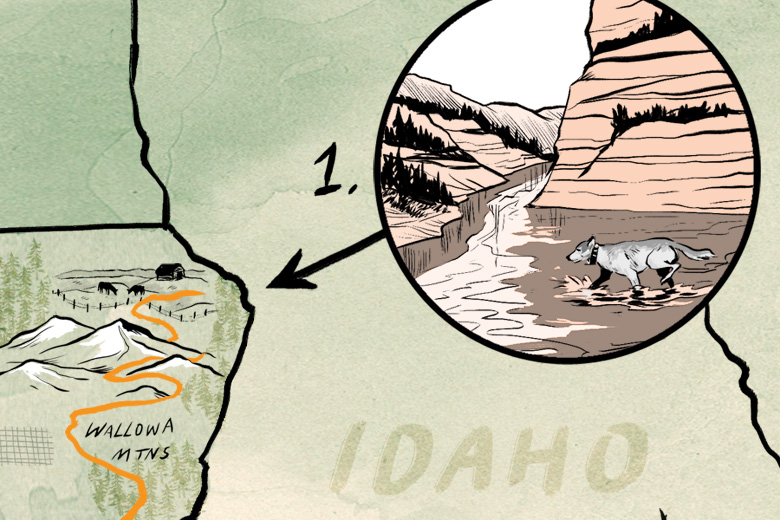 In: Backstory/By: Jay Simpson/Comments Off on The Story of Wolf B-300: Mother of Wolf OR-7 & Oregon’s First Wolf Resident/

Our expedition’s central character, Oregon’s famous wandering Wolf OR-7, was not the first of his lineage to have an epic tale of interstate dispersal. Before Wolf OR-7, the story of wolves returning to Oregon featured his mother, a female wolf known as B-300. 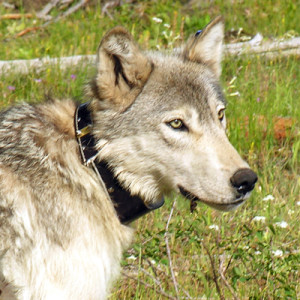 She was born in central Idaho to the Timberline pack, descendants of the gray wolves translocated from Canada in 1995. In late 2006, she was tagged with a VHF radio tracking collar by Idaho biologists and designated B-300. The following year she dispersed, doing what many young wolves do, leaving her pack in search of a mate and new territory.

Researchers use VHF radio collars to locate wolves within a specific known range by the means of radio telemetry. Due to the signal range limitations, the VHF collars have an effective range is 5-10kms when tracking on the ground and 15-25km when tracking from the air. Once B-300 left the areas researchers typically tack VHF collars, she effectively “fell off the map” and her location became unknown.

But on January 23, 2008, B-300 was found—in Oregon, over 100 miles from her last known location. After local reports of wolf sightings, Oregon wildlife managers used a helicopter and a VHF radio receiver to attempt to locate the suspected wolf. Once spotted, they were able to video record her as she crossed an open snow field in the Wallowa-Whitman National Forest near the Eagle Cap Wilderness Area. 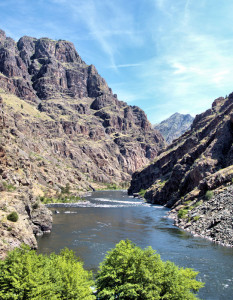 VHF collars cannot reveal the entire route of her dispersal to Oregon (as the more modern, computer-based GPS collars would), but we do know one thing: to enter Oregon she had to cross the Snake River in Hells Canyon, the deepest river gorge in North America. The Snake River creates an awe-inspiring border dividing Idaho and Oregon, each side of the river frequently walled with high cliffs. And once out of the canyon, most of the surrounding terrain is filled with dramatic mountains and high-elevation wilderness.

B-300 was not the first, known wolf to make this epic crossing, but she was the only one of the five reported wolves to stay and survive in the state. In 1999, the first known wolf to return to Oregon was located by radio collar and wildlife managers returned it to Idaho. The following year a wolf with a radio-collar was hit by a car. Then a wolf without a collar was found dead, shot. And in 2007 another collared wolf was found, also shot.

While most of the proceeding wolves were discovered in Oregon, the Department of Fish and Wildlife was in the midst of forming its first Wolf Conservation and Management Plan. Unverified sightings of wolves had led state biologists to believe there could be a small population of wolves in Northeast Oregon, but it was the video recording of Wolf B-300 that confirmed that wolves had officially returned to live in Oregon.

As the mother in the first breeding pair in Oregon, B-300 could be seen as a proverbial mother for the return of wolves to Oregon. In late spring 2008, B-300 had her first litter of wolf pups with a male wolf (later collared and designated OR-4). She gave birth to her second litter (with Wolf OR-7) in 2009, and was also known to have bred with OR-4 in 2010 and 2012.

As for how her offspring have faired, their individual stories are diverse and reflect many of the struggles of wolves returning to the Pacific Northwest. Here is a sample of stories from known offspring of B-300 and OR-4:

In the summer of 2013, state biologists reported that they lost the signal from B-300’s radio collar and she was not observed in the pack. It is now assumed that she has died.

Her lineage continues through her pup wolves like Wolf OR-7, who will likely continue to shape the story of wolves in the Pacific Northwest and beyond.