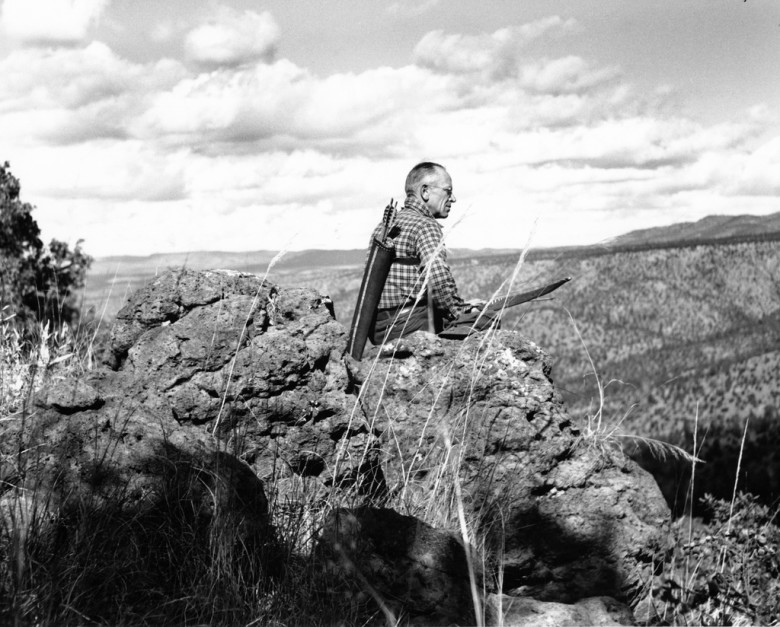 In: Stories Tales & Fables/By: Rachael Pecore-Valdez/Comments Off on TALES: Thinking Like a Mountain by Aldo Leopold/

A deep chesty bawl echoes from rimrock to rimrock, rolls down the mountain, and fades into the far blackness of the night. It is an outburst of wild defiant sorrow, and of contempt for all the adversities of the world. Every living thing (and perhaps many a dead one as well) pays heed to that call. To the deer it is a reminder of the way of all flesh, to the pine a forecast of midnight scuffles and of blood upon the snow, to the coyote a promise of gleanings to come, to the cowman a threat of red ink at the bank, to the hunter a challenge of fang against bullet. Yet behind these obvious and immediate hopes and fears there lies a deeper meaning, known only to the mountain itself. Only the mountain has lived long enough to listen objectively to the howl of a wolf.

Those unable to decipher the hidden meaning know nevertheless that it is there, for it is felt in all wolf country, and distinguishes that country from all other land. It tingles in the spine of all who hear wolves by night, or who scan their tracks by day. Even without sight or sound of wolf, it is implicit in a hundred small events: the midnight whinny of a pack horse, the rattle of rolling rocks, the bound of a fleeing deer, the way shadows lie under the spruces. Only the ineducable tyro can fail to sense the presence or absence of wolves, or the fact that mountains have a secret opinion about them.

My own conviction on this score dates from the day I saw a wolf die. We were eating lunch on a high rimrock, at the foot of which a turbulent river elbowed its way. We saw what we thought was a doe fording the torrent, her breast awash in white water. When she climbed the bank toward us and shook out her tail, we realized our error: it was a wolf. A half-dozen others, evidently grown pups, sprang from the willows and all joined in a welcoming melee of wagging tails and playful maulings. What was literally a pile of wolves writhed and tumbled in the center of an open flat at the foot of our rimrock.

In those days we had never heard of passing up a chance to kill a wolf. In a second we were pumping lead into the pack, but with more excitement than accuracy: how to aim a steep downhill shot is always confusing. When our rifles were empty, the old wolf was down, and a pup was dragging a leg into impassable slide-rocks.

We reached the old wolf in time to watch a fierce green fire dying in her eyes. I realized then, and have known ever since, that there was something new to me in those eyes – something known only to her and to the mountain. I was young then, and full of trigger-itch; I thought that because fewer wolves meant more deer, that no wolves would mean hunters’ paradise. But after seeing the green fire die, I sensed that neither the wolf nor the mountain agreed with such a view.

Since then I have lived to see state after state extirpate its wolves. I have watched the face of many a newly wolfless mountain, and seen the south-facing slopes wrinkle with a maze of new deer trails. I have seen every edible bush and seedling browsed, first to anaemic desuetude, and then to death. I have seen every edible tree defoliated to the height of a saddlehorn. Such a mountain looks as if someone had given God a new pruning shears, and forbidden Him all other exercise. In the end the starved bones of the hoped-for deer herd, dead of its own too-much, bleach with the bones of the dead sage, or molder under the high-lined junipers.

I now suspect that just as a deer herd lives in mortal fear of its wolves, so does a mountain live in mortal fear of its deer. And perhaps with better cause, for while a buck pulled down by wolves can be replaced in two or three years, a range pulled down by too many deer may fail of replacement in as many decades. So also with cows. The cowman who cleans his range of wolves does not realize that he is taking over the wolf’s job of trimming the herd to fit the range. He has not learned to think like a mountain. Hence we have dustbowls, and rivers washing the future into the sea.

We all strive for safety, prosperity, comfort, long life, and dullness. The deer strives with his supple legs, the cowman with trap and poison, the statesman with pen, the most of us with machines, votes, and dollars, but it all comes to the same thing: peace in our time. A measure of success in this is all well enough, and perhaps is a requisite to objective thinking, but too much safety seems to yield only danger in the long run. Perhaps this is behind Thoreau’s dictum: In wildness is the salvation of the world. Perhaps this is the hidden meaning in the howl of the wolf, long known among mountains, but seldom perceived among men.