TALES: St. Francis and the Wolf of Gubbio 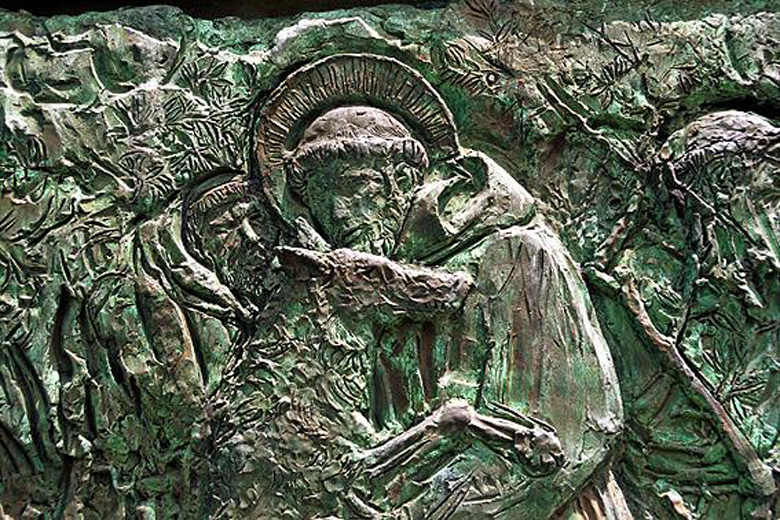 TALES: St. Francis and the Wolf of Gubbio

In: Stories Tales & Fables/By: Rachael Pecore-Valdez/Comments Off on TALES: St. Francis and the Wolf of Gubbio/

If you were to travel today, along the narrow streets of the village of Gubbio, in Italy, you might venture across a monument commemorating an event in 12th century Gubbio, where St. Francis of Assisi once met a gray wolf.

Francis, as he was known then, was a friar and well known throughout the region as a friend of both beast and men. He loved to take long walks in the hills, and one could often hear Francis humming a tune along with the birds who would circle around his head and even rest on his shoulders.

One day as he walked, he came to the top of a hill and saw down in the valley, the village of Gubbio. The city gates were closed, and there was no one out working in the fields.  The crops were unkempt, and flies circled around the unburied carcasses of sheep lying about. Something was very wrong, and he hurried to the city gates and knocked loudly. No one answered. He knocked again, and the gates slowly swung open enough to reveal the wide eye of the gatekeeper. “Francis! Oh we’re so glad you’ve come. Quickly, come inside!” Shutting the door tightly behind Francis, the gatekeeper led Francis straight to the Mayor’s house.

Francis was welcomed by the Mayor who without delay told Francis that the whole village was being held hostage by a monstrous, rabid gray wolf. “Our children can no longer play outside, the wolf has taken our sheep and those who bravely went after him did not return.” Francis quietly listened to the Mayor of Gubbio’s woes, and when he was done replied that he would leave the next morning at dawn to meet with the wolf. The Mayor cried out, “No! Francis, please save yourself! There must be another way!” Francis could not be dissuaded and the next morning at the break of dawn he walked toward the city gates. The villagers followed Francis through the streets in silent fear for his life, but stopped at the city gate. They peered over the city walls nervously, as Francis walked beyond the fields to the edge of the great forest.

It seemed even the birds were holding their breath. An eerie silence was broken only by the low growl of a wolf, which echoed throughout the valley. The villagers trembled in fear as they watched the great wolf run from the woods, his teeth barred, straight toward Francis. Francis stood still, his arms outstretched as if surrounded by a great shield. Just when the villagers surely thought Francis was a goner, they watched in awe as the wolf suddenly stopped. He sat just in front of Francis. The villagers strained to hear what Francis said, and had to rub their eyes to believe what they saw next. Francis held his hand outstretched to the wolf, and the wolf gingerly set his paw onto Francis’s hand.

Francis then walked slowly back to the village, with the wolf on his heels. The villagers parted before them, and followed Francis and the wolf in disbelief to the village square. Then Francis spoke to the crowd, “Dear people of Gubbio, Brother Wolf has made a pact of peace. He will harm you no more, and in return you must no longer harm him. All past wrongs are forgiven.” Then once again, the wolf placed its paw in Francis’s hand to reassure the people of his pledge.

The people stood there in awe, nervously eyeing the wolf. Then one young girl stepped out from her mother’s skirt and bravely walked toward the wolf. She held her hand outstretched and soon the villagers were giggling with relief as they watched the wolf roll over while the girl rubbed his belly. The townspeople agreed to share morsels of their meals with the wolf, and the wolf lived among the villagers for two years before dying of old age.

The people of Gubbio mourned the death of the wolf, and even today, proudly share the story of St. Francis and the wolf to all who wander their streets and ask to hear the story.