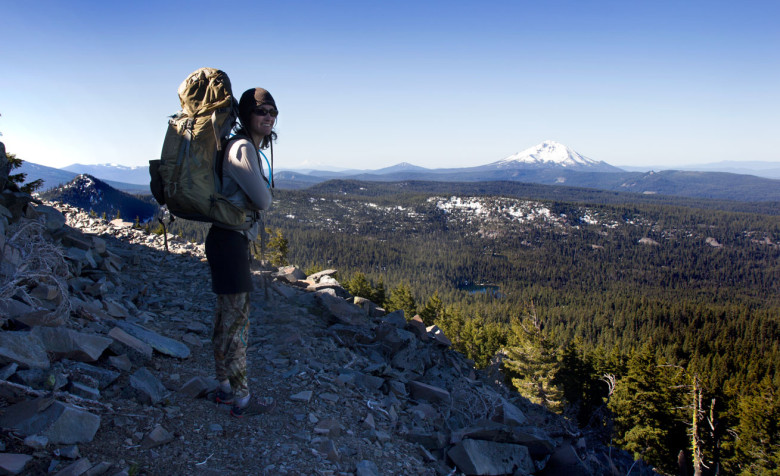 “Since human tolerance has been and remains the primary limiting factor for wolf survival, building tolerance for this species will require acceptance of the Plan’s approach to addressing wolf conservation and human conflict.” – Oregon Wolf Management Plan

In June of 2014, 6 humans completed a nearly 1,200-mile trek from Northeast Oregon into Northern California to retrace the life of a radio-collared wolf, from birth to where he now lives with his mate and pups in the Rogue-Siskiyou National forest.

As one of these six humans, my drive was to learn about the life and science of a modern wolf, Wolf OR-7, beyond the historical stereotypes, hearsay, and folktales. However, through the ups and downs of remote roads and trails, the Wolf OR-7 Expedition for me became less a journey to learn about Wolf OR-7, and more a question about how humans work with conflict.

Human-wolf conflict management has changed dramatically. From the 1600’s to mid-1900, the dominant European-American conflict resolution standard was a government funded mandate to kill all wolves. By 1973, with wolves, bald eagles, grizzly bears and thousands of other species reduced to a fraction of their original range, the US Endangered Species Act charged US Fish and Wildlife with creating a different way to balance  humans and wildlife interests. In 2002-2005, Oregonians began a process of town hall meetings and stakeholder input to draft an Oregon Wolf Management Plan that carefully outlined a legal process for addressing conflicts.

I’m a seasoned conflict avoider, but the controversy surrounding wolves and the conflicts that surfaced within the team during the expedition were unavoidable. As we retraced the approximate, 2011 dispersal route of the 7th wolf to be radio-collared in Oregon (Wolf OR-7), we interviewed stakeholders and people we met along the way who now find themselves in wolf country. At the risk of oversimplifying the nuance and variety of the conversations we had, I venture a summary of the issues surrounding wolf recovery as I understand them currently.

The tangible, visible effects of wolf recovery are often expressed as the center of the conflict. An additional carnivore on the landscape is a change, and change requires time and often money. Even though the fate of beef cattle is beef, small farm producers spend their careers keeping cattle alive and have expressed that it’s difficult to lose cattle for any reason.

Livestock: Wolves hunt differently than cougars and bears. They hunt by chasing prey which sheep and cattle aren’t accustomed to anymore. In addition to potential livestock kills, livestock on the run may tear through fences, become stressed and/or injured. Increased vigilance on the part of livestock producers is required when wolves are in the area. However, for Phase 1 and 2 of the Wolf Management Plan, producers are not allowed to shoot at wolves and one producer mentioned that it felt like going into a boxing match with his hands tied.

Oregon Department of Fish and Wildlife, taxpayers, and conservation groups recognize this, and taxpayer supported livestock compensation programs are in place to assist livestock producers. Additionally, “Oregon Department of Fish and Wildlife (ODFW) can provide technical assistance and non-lethal tools to help minimize wolf-livestock conflicts in many situations. Supplies such as fladry, fencing, and Radio Activated Guard devices may be available, as well as funding for carcass removal projects, range riders, and other potential practices. Producers are encouraged to contact their local ODFW office to determine funding and supply availability for their area (http://dfw.state.or.us/wolves/).”

Livestock are defined as horses, mules, donkeys, cattle, llamas, alpacas, sheep, goats, swine, domesticated fowl and any fur-bearing animal bred and maintained commercially. Working dogs and sporting dogs are also considered for compensation. “As of Dec 31, 2015, 128 livestock or domestic animals are confirmed to have been killed by wolves in Oregon since wolves began returning to the state in the late 1990s (http://www.dfw.state.or.us/Wolves/faq.asp).”

Pets and people: Outdoor enthusiasts and dog owners should heighten their daily awareness and vigilance in wolf country. Encounters with wolves should be approached in the same way as bears and cougars, namely avoid them. If seen, stand tall and back away slowly. Do not run as running may trigger a chase instinct. Wolves are much more likely to be aggressive toward other dogs than humans, and pets should be kept close in wolf country.

“Compared to other wildlife-human interactions, attacks by wolves on humans are quite rare. There are currently an estimated 10,000-20,000 wolves in Europe, 40,000 in Russian and 60,000 in North America (2003). Despite the high numbers of wolves, records can be found for only 4 people being killed in Europe and 4 in Russia by non-rabid wolves during the last 50 years. In North America since 2005, two documented wolf-caused deaths have occurred: one in Canada and one in Alaska.” – Oregon Wolf Management Plan (page 72). These numbers are greatly exceeded by bear, cougar and domestic dog attacks.

Elk and deer: There are also concerns among hunters over the numbers of deer and elk that wolves may take, and fears that wolves will decimate game herds. While populations flux, and indeed cougar and bear predation on deer has increased in Eastern Oregon, biologists counter that wolves and deer have lived in the same areas for millennia, and if wolves could eat them all up they would have done that long ago. Wolves can change the way that herds feed and move, however, and it may become more difficult to locate deer and elk.

For state deer and elk numbers and an overview of their interactions with wolves see the Oregon Wolf Management Plan (page 56).

While there are practical problems and solutions to the return of wolves, the controversy goes deeper than the tangible, visible effects.

In the Northwest, the majority of voters live near urban centers that stand little chance of ever living near wolves. Living with wolves requires a change in awareness and livestock management that rural areas shoulder the brunt of. Federal laws like the Endangered Species Act, take the whole US into account and may supersede landowner control which can fuel resentment. Wolves have become a symbol of the so called urban/rural divide to the detriment of the wolf.

In addition to years of contention over grazing rights on public land, water rights, and changing demographics wolves are just one more log to the fire.  As we traveled past many small towns, people we met noted the lack of opportunity for young people and that many towns are a shadow of what they once were. The return of wolves exacerbates the stress of unemployment, and a history of local communities not being included or heard in decision-making processes that impact their communities.

We met a person along the route who had raised a pet wolf, and offhandedly commented that cattle didn’t belong on this landscape at all and ranchers should be outlawed. A shopkeeper we met believed all wolves should be shot because of what they did to livestock. Another person thought environmental nonprofits fanned heated issues just to fundraise and stay in business. Others believed that politicians and business interests fanned the wolf issue as a tactic to undermine the Endangered Species Act.

“Such conflicts include deeply held values, high stakes, power imbalances, complexity, and a sense of moral superiority that may drive parties to perpetuate the fight, even when they cannot win in the short term.”

“A conservation organization’s presence and resources devoted to wildlife needs may be perceived as ignoring or slighting the physical and social needs of the local community. Ranchers or hunters may experience national wildlife protection laws as an infringement on their autonomy. For conservation professionals whose identity is focused on the conservation of wildlife, actions that threaten to extirpate a species may be considered a profound moral violation.”

Ed Bangs, the wildlife biologist who led the U.S. federal government’s northern Rockies wolf recovery effort from 1988 until 2011, states that wolf management is “all about humans and their values, and how we use symbols to discuss our values with other people.”

“Eliminated from Montana, Idaho, and Wyoming by the 1930s, gray wolves began recovering in the 1980s. Despite efforts to address livestock depredation by wolves through compensation programs, innovations in depredation deterrents, and many other conservation efforts, antagonism between pro-wolf and anti-wolf constituencies remained intense. (Several researchers) assessed that factors that influence tolerance of wolves and found that ‘deep-rooted social identity’ was among the most powerful predictors, while compensation for livestock losses had no influence on tolerance levels.”

“Conflict is an evitable outcome of human interaction. It is the consequences of conflict that determine whether it is constructive or injurious.”

Humans are the greatest threat to wolf recovery. Whether by human activities such as road traffic, urban development, or poaching, the future of wolves in the U.S. hinges on social tolerance between humans. Human-wolf coexistence depends on human-human coexistence.

I believe the future of humans and wildlife species on the planet will depend on our ability as humans to address deep-rooted conflicts, build bridges across entrenched party lines, and an ongoing effort to provide opportunities for dialogue.

Throughout this mission to walk in the wake of a wolf, I tried to keep the wolf controversy at bay. I naturally dislike conflict, and distrust people who enjoy fanning flames including the media. While I’m not new to environmental controversies, I was shocked by accounts of the threats that the different wolf camps have thrown at each other. I didn’t want to be pegged as belonging to either camp, yet worried I would appear too neutral to earn the trust of conservation groups, and too conservation-minded for livestock producers. Indeed my own identity blurs lines as I was raised in rural Oregon as part of a generation that claims both hippie and hick. It was significant for me to pick up the phone, and carry out the idea of the OR7 expedition by cold call different stakeholders. Sometimes it took weeks for me to work up the courage for one phone call. It was cathartic in the end at how sincere and friendly everyone I talked to was regardless of their views on wolves.

While on Wolf OR-7’s route, there seemed to be a microcosm of the larger conflict surrounding wolves within the Wolf OR-7 Expedition team. Everyone on the team, at one point or another, found themselves at odds with another team-mate and interestingly, each by a different person. There were early mornings and late evenings where I was asked to listen and mediate between team-mates. There were issues of boundaries around our roles, decision making, too many chefs in the kitchen, distrust, different values, east coast vs. west coast communication styles…  While we were able to acknowledge and air the negativity, much of it we seemed unable to transform, and yet admirably, everyone remained committed to the project.

I set out to learn about the life of an actual wolf beyond the stereotypes, hearsay, and folktales. I learned a lot about wolves, and I learned more about the actual lives of stakeholders, my team, and the stereotypes and stories we tell about each other. My personal journey was about tracking my fears, reaching out, and listening to others. In that exchange, there’s a shift. It’s a subtle reorganization of the walls that negativity and fear of any form stealthily build to disconnect a person, encasing them in a silo unto themselves.

I believe the most important step toward making conflict constructive is the choice to show up face to face again and again, with the “other” and listen like our lives depend on it.

Call it cliché, but it’s a true story.