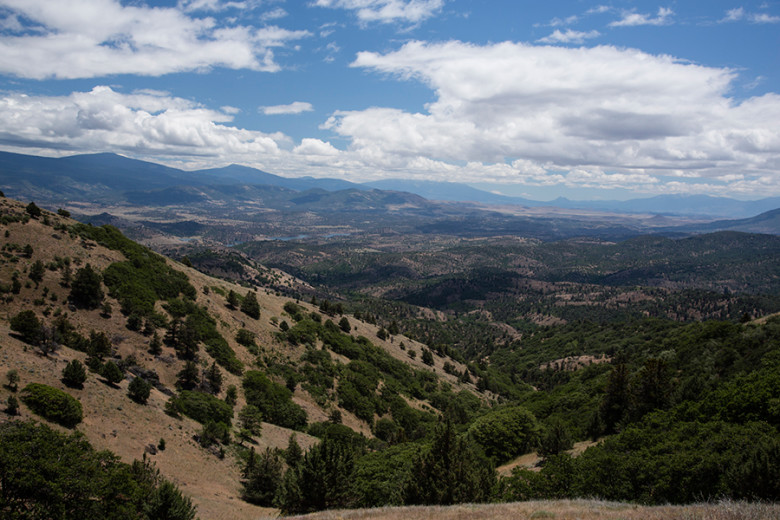 In: On the Trail/By: Rachael Pecore-Valdez/Comments Off on Bordering Home/

Riding west towards Iron Gate Reservoir on the Klamath River along the CA / OR border, Dave Moskowitz stopped us mid-track and asked which side of the border we thought we were on. I really couldn’t say, there was no difference between the dry oak savannah to the South and the dry oak savannah to the North. He pulled out his maps, and we happened to be literally standing on the border, an unmarked border miles away from any paved road or town.

The state border exists only in our minds, and yet just a step to the north I felt at home in Oregon, and a step to the south like a visitor in California. Weird but true. Maybe it’s that I can’t vote in California, or maybe it’s just the word Oregon. Oregon defines the place I grew up in and a place my great, great grandfather moved to as a logger back when it was called the Oregon Territory. Or maybe it’s that as a card-carrying Oregonian it’s my duty to poke fun at Californians thus making a discrete border essential.

Wolf OR-7 crossed the CA/OR border multiple times, likely following the smell of prey, water and a certain female black wolf. He is now raising pups in the Rogue-Siskiyou National Forest and runs regular rounds scent-marking a 50 to 200 square mile border he has defined as his home.

Wolf OR-7 will defend that border from other wolves and coyotes, as wolves do, and his pups will grow up familiar with every stream and animal in the area. Around two years of age, these pups may also disperse and set out to mark their own territories. Will they stay in Oregon, or head South to California?

With the recent vote to protect wolves under the Endangered Species Act in California as they are in Oregon, these wolf pups aren’t likely to care an owl’s hoot about our political borders. They will notice only changes in cover, movements of prey, and the boundaries water carves.